The HSIP Area Code Boundaries 2007 Q4 dataset represents the geographic telephone area codes, also known as Numbering Plan Areas (NPAs), for the North American Numbering Plan (NANP) area which includes the following countries: the United States and its territories and possessions, Canada, Bermuda, Anguilla, Antigua & Barbuda, the Bahamas, Barbados, the British Virgin Islands, the Cayman Islands, Dominica, the Dominican Republic, Grenada, Jamaica, Montserrat, St. Kitts and Nevis, St. Lucia, St. Vincent and the Grenadines, Trinidad and Tobago, and Turks & Caicos. Excluded from this dataset are area codes considered to be non-geographic NPAs (area codes designating a specific service rather than a specific geographic area), such as toll-free area codes which encompass the entire NANP area. These area codes are in a separate dataset called HSIP Toll Free Area Codes 2007 Q4 due to the magnitude of the shapes' sizes, which when included in this dataset excessively retards the refresh rate making the dataset a cumbersome tool to use during the processing of other datasets.

The HSIP Area Code Boundaries 2007 Q4 dataset provides the telephone area codes of the North American Numbering Plan (NANP) area, which covers 19 countries, including the United States and its territories, for use in telecommunications analysis. TGS uses this dataset for reference in the verification and quality assurance processes of other datasets. 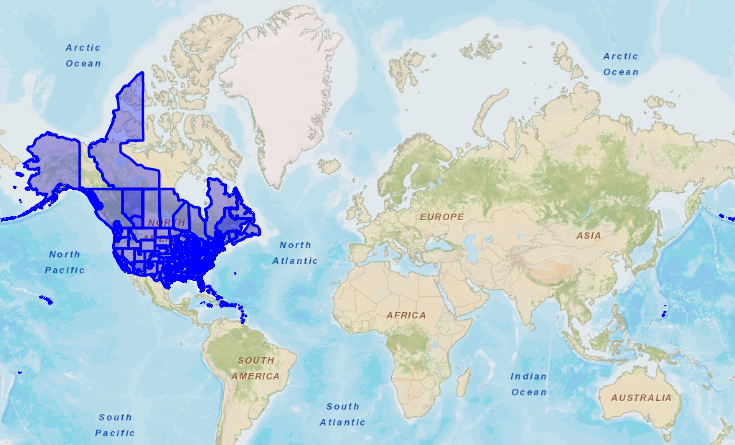