Sedimentary Paleozoic rocks in the Hollandale embayment in southeastern Minnesota are as thick as 2,000 ft. This sedimentary sequence, together with the Proterozoic Hinckley Sandstone and the Quaternary drift, is divided into six regional aquifers: undifferentiated drift, Upper Carbonate, St. Peter, Prairie du Chien-Jordan, Ironton-Galesville, and Mount Simon-Hinckley.

Potentiometric-surface maps for each aquifer indicate that movement of ground water is predominantly toward the major rivers. The St. Croix, Minnesota, and Mississippi Rivers constitute regional discharge boundaries for ground-water flow. A major ground-water divide in the St. Peter, Prairie du Chien-Jordan, Ironton-Galesville, and Mount Simon-Hinckley aquifers in the south-central part of the Hollandale embayment separates ground-water flow northward toward the Twin Cities area and southward toward Iowa. The St. Peter and Prairie du Chien-Jordan aquifers in the southeastern part of the embayment contain ground-water mounds as high as 90 ft above the regional potentiometric surface. The mounds occur as a result of increased recharge where the Decorah-Platteville-Glenwood confining bed has been removed by erosion and the aquifers subcrop beneath drift that is about 20 ft thick. This head distribution produces a locally complex pattern of flow in which ground water moves southwesterly toward Iowa instead of directly toward the Mississippi River. 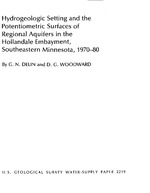