Most people in the California Region live in a semiarid or arid climate, with precipitation less than the potential evapotranspiration- environments of perennial water deficiency. The deficiency becomes most onerous during the characteristically rainless summers and during recurrent droughts that may continue for 10--20 years. However, water from winter rain and snow can be stored for use during the dry summer months, and water stored during a wet climatic period can be used in a succeeding dry period; moreover, perennial deficiency can be overcome by bringing water from areas of perennial surplus. Ground-water reservoirs have especial significance in arid and semiarid regions as repositories where water is stored or can be stored [...]

Most people in the California Region live in a semiarid or arid climate, with precipitation less than the potential evapotranspiration- environments of perennial water deficiency. The deficiency becomes most onerous during the characteristically rainless summers and during recurrent droughts that may continue for 10--20 years. However, water from winter rain and snow can be stored for use during the dry summer months, and water stored during a wet climatic period can be used in a succeeding dry period; moreover, perennial deficiency can be overcome by bringing water from areas of perennial surplus. Ground-water reservoirs have especial significance in arid and semiarid regions as repositories where water is stored or can be stored with minimum loss by evaporation.

The rest of the California Region includes the mountains, canyons, slopes, and foothills of the Sierra Nevada, Coast Ranges, and Basin Ranges, whose consolidated rocks and products of their weathering may be permeable locally but are not generally so. Here, the prevailing method of ground-water development is still mostly trial and error, and while in many places a well can yield enough water for a family, some families might have to do without amenities such as flush toilets and automatic washers.

For more than half a century the California Region has led all others in North America in pumping of ground water as well as in the area, variety, yield, and export of crops irrigated by water from wells. It has led in the development and use of deep-well turbine pumps for large yield and in the drilling of water wells to great depths. At the same time, such developments have resulted in the elimination of artesian pressures that produced thousands of flowing wells in the 19th century and led to the wide distribution of "falling water tables." Also, California was first to induce encroachment of seawater into wells (in 1906); first to recognize subsidence of land caused by pumping from wells (in 1933), generating news about land sinking in San Jose, Long Beach, and along the Delta-Mendota and Friant-Kern Canals; and first to experience pollution of ground-water reservoirs by brines, chemicals, industrial wastes, and petroleum byproducts including gasoline. The region has led in research in several fields leading to solution of many of these problems.

Ground-water problems developed rapidly after World War II with booming population, agriculture, industry, and water demand during several years of regionwide drought. Water levels in wells trended downward almost everywhere as a natural effect of the drought and at accelerated rates in areas of pumping for new enterprises or to supplement subnormal surface-water supplies. The declines in many pumping areas exceeded 100 feet (30 metres), and in some confined aquifers the potentiometric surface was drawn down more than 330 feet (100 metres). The depletion of ground-water storage has had "permanent" side effects, including subsidence of the land exceeding 10 feet (3 metres) in extensive areas, and seawater intrusion that ended the useful lives of many wells along the coast and as much as 6 miles (10 kilometres) inland. Some problems have been solved, but these solutions have at times created other problems. Many ground-water reservoirs have gone through one or more stages - exploration for productive aquifers, exploitation and development for use of the water, restriction to the perennial supply or "safe" yield, importation of surface water, artificial recharge of ground water, conjunctive use of surface and ground water, protection of water quality, and integrated management of use and disposal of water. This evolutionary sequence is unique for each reservoir, and so generalizations become difficult in a regional appraisal; also, the changes with time are significant and varied, and knowledge of prior events is a prerequisite in an appraisal of the resource in a specific year.

As of 1970, water levels in many wells had risen significantly from the minimum levels of record reached during the 1960's or earlier; only in areas of new development and in desert areas of long-continued "mining" of nonreplenished water was ground-water storage still being depleted. Land subsidence has continued at diminishing rates and practically has come to a halt in some areas; invading seawater has been stopped or nudged back in most places where problems were significant. The current, favorable situation has been helped by climatic variations, from drought in 1945-52 and exceedingly dry years in 1959 and 1961 to above-normal precipitation in 1969 and 1970; but most of the serious problems have been solved by human efforts, including especially the implementation of the California Water Plan, transporting water from areas of perennial surplus to areas where it is used in lieu of ground water or for ground-water replenishment. All major urban areas now import water to supplement or replace the water pumped from wells. Extensive agricultural areas that formerly were irrigated solely by ground water now obtain some of their water from surface reservoirs and canals, especially in the Central Valley. With surface water available as an alternative supply, well owners can view their ground water with complacency. But complacency can lead to neglect and carelessness and consequent deterioration of the ground-water resource by pollution.

Claiming heritage from the English Common Law, the existing California law grants to the landowner (riparian) and private enterprise (appropriator) rights to the water stored in ground-water reservoirs or discharged from them, including the base flow of streams. Ground-water development has been by private and local enterprise, and the California legislature has protected and encouraged local responsibility, control, and management of ground water. As to surface water, a constitutional amendment in 1928 limited riparian rights to the quantities of water that were "reasonably required for the beneficial use to be served." The surpluses have become public waters which are collected, stored, transported, and delivered under various contracts by Federal, State, and other agencies. The agencies have not stored water underground because of uncertainty as to their rights, but some local agencies have been encouraged with favorable pricing schedules to undertake the artificial recharge and management of ground-water reservoirs. Thus, conjunctive use of surface and ground water has become a matter of interagency negotiation.

Of all the constraints on effective use of ground-water reservoirs, the most formidable may be the attitudes of people. Assurance of water supply is vital in areas of water deficiency, and Government has assumed increasing responsibility for the welfare of people in these areas. Unfortunately, when Government provides this assurance, most beneficiaries demand continued subsidy to the exclusion of perhaps cheaper private development. Indeed, as the water resources are presently segregated-with private rights predominant in ground water and public interest dominant in surface water-ground-water development has suffered for lack of public concern. The region has the scientific and technologic capability for effective use of groundwater reservoirs, as shown by the achievements and programs of several districts, but many districts are not organized or staffed for such comprehensive management and will need assistance and scientific expertise available from State and Federal agencies. Those agencies, in turn, may not have the scientific data that are essential to prevent haphazard activities and to enable programs to be organized for the most effective and attractive utilization of the water resources. In these days of increasing concern over pollution, existing data are generally inadequate to assess the natural deterioration of ground waters as a basis for defining pollution. 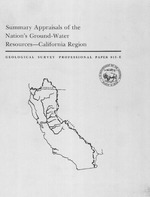