The three primary geospatial layers used in this analysis were a digital elevation model (DEM), a vegetation layer, and a human footprint layer.  Due to the geographic extent of the North Pacific Landscape Conservation Cooperative, digital elevation models from different sources had to be used to create one seamless DEM.  The digital elevation models were obtained from the Shuttle Radar Topography Mission (SRTM), the United States Geologic Survey, and the Government of the Yukon Territory.  Each digital elevation model dataset was resampled to a common pixel size (one km) and mosaicked into a seamless digital elevation layer.  The Human Footprint geospatial layer was obtained from the Socioeconomic Data and Application Center (SEDAC) and resampled to one km.  Each Human Footprint pixel represents an amount of human activity ranging from one to 100 with 100 being represented as the being the most heavily influenced  by human activity.  The Nielson Drapek Biome Cover was the land cover used for this project.  This dataset was also resampled to the one km spatial resolution.  Once all of the datasets were resampled to a common spatial resolution of one km, they were clipped to the boundary of the NPLCC study area and given a custom Albers Equal Area projection.        Once all of the datasets were compiled into a common resolution and projection, a series of steps were taken to create the final resistance girds. The Nielson Drapek vegetation values were reclassified for each year and condition.  Focal statistics were then run on the resistance grid combinations using a five by five window that calculated the mean of the window.  This process was used to smooth out the sharp edges in the resistance grids. The digital elevation grid was then scaled into a high and low resistance level.  The high and low resistance levels were based on the pixel’s elevation.  The same process was used for the human footprint layer.  The human footprint and elevation grids were combined into a four way combination.  These layers were then combined with the eight Nielson Drapek land cover biome layers.  A Python geoprocessing script was then written to loop through all of grids in the directory and for each grid find the maximum value in the grid as well as created an output with the maximum value in the grid replacing any cell with  no data and left the original input value for all cells with data. The output grid raster files were then converted to ascii text files and finally renamed with a .rsg extension.  The files were then ready for input into UNICOR.       The North Pacific Forest Landscape Connectivity Project (NPFLCP) has created innovative and useful geospatial applications that highlight connectivity of montane conifer and subalpine species in the North Pacific Landscape Cooperative.  The NPFLCP has launched a project website containing information about the project, web maps, dynamic geospatial tools, and resources.  The website is available at http://npflcc.dbs.umt.edu/.        The NPFLCP has developed six web based mapping applications.  All of these applications, except the genetic connectivity time series application, were built using the ArcGIS Viewer for Flex 3.0 and ArcGIS API for Flex 3.0.  The first web mapping application allows users to view the North Pacific LCC domain and view possible threats to this LCC.  Possible threats include oil and gas development, as well as the expansion of pine beetle.  The second web mapping application allows users to view Montane Conifer connectivity of areas of high elevation and high human footprint in the North Pacific Landscape Conservation Cooperative study area. This application provides Montane Conifer Connectivity for 2000 and 2080 (A1B).  The next three web mapping applications provide connectivity pathways for Montane Conifer (low human footprint, low elevation), Subalpine (high human footprint, high elevation), and Subalpine (low human footprint, low elevation) for 2000 and 2080 (A1B).  Each of these applications shows considerable change in the connectivity patterns in 2080.  Figure 1 shows an example of Subalpine low human footprint, low elevation difference from 2000 to 2080. The sixth web mapping application allows users to view genetic connectivity and projected change in genetic connectivity for a short-range, species-specific disperser in the ecotypes, montane conifer and subalpine.  This application was developed using the ArcGIS Online for Organizations application and allows a user to view the time sequence on the map.  Large spatial changes can be seen in each species time series. 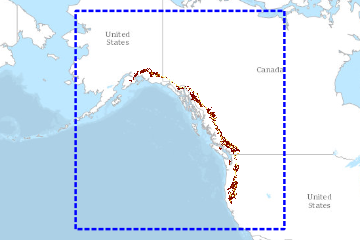