This dataset shows modelled habitat suitability for the Pacific-slope Flycatcher (Empidonax difficilis) under current and projected future conditions. We built habitat suitability models for 237 bird, 117 mammal, and 12 amphibian species. Species were chosen for inclusion in the study based on a simple set of criteria. For a species to be included in the study, it had to be primarily associated with terrestrial habitats, have a digital map of its current range, and have some portion of its current distribution intersect with the study area extent. In addition, we restricted the list of species used in the study to those for which a well-performing continental-scale model could be built. Digital species range maps were converted from [...] 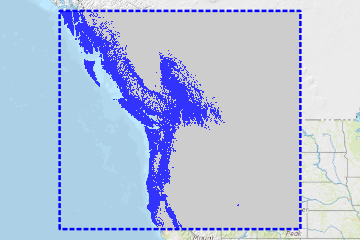