Summary Acid rain levels in the Adirondack region have substantially declined and recovery from acid rain is underway. Recovery is being limited by the depletion of soil calcium that occurred over past decades. Not only is calcium needed for neutralizing acidity, it is an essential nutrient for terrestrial and aquatic ecosystems. However, recovery of soil calcium has not yet been observed. Whole-ecosystem restoration through watershed liming, possibly combined with in-stream liming, may provide a practical option for stimulating recovery of certain acid-sensitive, high-value natural resources. Information from past liming efforts, however, is insufficient for determining the degree of success that could be achieved with liming under [...]

Acid rain levels in the Adirondack region have substantially declined and recovery from acid rain is underway. Recovery is being limited by the depletion of soil calcium that occurred over past decades. Not only is calcium needed for neutralizing acidity, it is an essential nutrient for terrestrial and aquatic ecosystems. However, recovery of soil calcium has not yet been observed.

Whole-ecosystem restoration through watershed liming, possibly combined with in-stream liming, may provide a practical option for stimulating recovery of certain acid-sensitive, high-value natural resources. Information from past liming efforts, however, is insufficient for determining the degree of success that could be achieved with liming under contemporary levels of acid rain and soil-calcium depletion. To evaluate this treatment approach, lime is being applied aerially to an entire watershed and also directly to the channels of two streams outside the limed watershed.

The study is being conducted in the Honnedaga Lake watershed in the southwestern Adirondack region, where acid rain effects on soils and surface waters are among the most severe in the eastern U.S. The effects are being monitored through measurements of soil and soil-water chemistry, tree growth and regeneration, soil fauna, stream chemistry, aquatic invertebrates and brook trout.

In an accompanying study, the effects of the lime application on mercury bioaccumulation are also studied. [See: The Effects of Watershed and Stream Liming on Mercury Dynamics at Honnedaga Lake] The Adirondack region is considered a “hot spot” where high levels of mercury bioaccumulation have been measured in fish and birds. Mercury released into the environment through the burning of coal is transported in association with dissolved organic carbon, which is expected to increase from the liming. However, liming will also ameliorate acidic conditions that favor the mobilization and transport of mercury.  Therefore, effects of liming on the mobilization of mercury are uncertain.

2.                  Earthworms are considered intolerant of acidic soils and are not native to the Adirondack region.  Therefore it was hypothesized that liming the acidified Honnedaga soils would create habitat suitable for earthworms, which are easily spread by fisherman.  Once established, earthworms can greatly accelerate decomposition of organic matter, alter soil nutrient cycling and cause organic matter to be transferred from the forest floor deep into the mineral soil, thereby altering root development and competition between tree species.  A microcosm experiment using native Honnedaga soils, both limed and unlimed, showed that a substantial reduction in soil acidity did in fact result in high survival rates of earthworms (Lumbricus terrestris), whereas 100% mortality occurred in unlimed soils.

3.                  The only management option other than emissions reductions for combating the effects of acidic deposition has been the application of lime to neutralize acidity after it has been deposited on the landscape.  However, continued declines in acidic deposition have led to partial recovery of surface water chemistry, and the start of soil recovery. Liming is therefore no longer needed to prevent further damage.  As more is learned about recovering ecosystems, it has become clear that recovery rates vary with watershed characteristics and among ecosystem components.  Lakes appear to show the strongest recovery, but recovery in streams is sluggish and recovery of soils appears to be in the early stages. Where in the system the lime is applied is therefore critical in how the treatment effects various ecosystem components.  Application of lime to a watershed provides the advantage of increasing Ca availability in the terrestrial system and reducing or preventing mobilization of toxic Al, an outcome that is beneficial to both terrestrial and aquatic ecosystems.  However, the goal should not be complete neutralization of soil acidity, which is naturally produced.  Liming of naturally acidic areas such as wetlands should also be avoided to prevent damage to indigenous species that rely on an acidic environment.

4.                  In-stream and aerial (whole-watershed) liming of three acidified tributary watersheds of a high-elevation Adirondack lake in New York State resulted in marked improvements in water chemistry in all three limed streams.  However, results generally suggested that neither liming technique succeeded in improving the condition of aquatic macroinvertebrate communities. The watershed application caused a brief and unsustained decrease in the density of macroinvertebrates and increase in the proportion of sensitive taxa. The in-stream applications appeared to reduce the abundance of macroinvertebrates, particularly in one stream where undissolved lime covered the natural substrate. The close proximity of our study sites to the in-stream application points (50 and 1200 m) may partly explain these negative effects. Our results are consistent with prior studies of in-stream liming which indicate that this technique often fails to restore macroinvertebrate communities to a pre-acidification condition, especially at distances < 1.5 km downstream of the lime application point. The inability of either liming technique to improve the condition of macroinvertebrate communities may be partly explained by the persistence of acidic episodes in all three streams. This suggests that in order to be effective, liming programs should be aimed at avoiding even temporary episodes of unsuitable water chemistry rather than just meeting minimal criteria the majority of the time.

5.                  To investigate liming as a method to accelerate recovery of brook trout, the channels of two acidified streams were limed annually from 2012 to 2015; and an entire watershed of a third acidified tributary was limed by helicopter in 2013.  Stream flow, water chemistry, and density of young-of-year (YOY) brook trout were measured in limed streams, an untreated acidified stream, and a buffered reference stream.  Lime additions increased pH and acid neutralizing capacity and decreased inorganic monomeric aluminum concentrations to less than 2.0 µmol/L, the minimum concentration at which in situ brook trout mortality has been documented.  However, of the two channel-limed streams, only stream T8 showed a significant response (P < 0.01) in YOY density; increasing from a mean of 0.4 fish/m2 before liming to 2.7 fish/m2 after liming.  No YOY brook trout response was observed in the stream within the limed watershed. Groundwater inputs to streams were identified by relative differences in temperature and concentrations of silica and sodium. YOY brook trout densities increased only in the channel-limed stream (T8) with suitable groundwater inputs for fall spawning and a summer nursery.  Results suggest that targeted liming of acidified streams with the necessary groundwater habitat could be beneficial in accelerating recovery of brook trout populations. 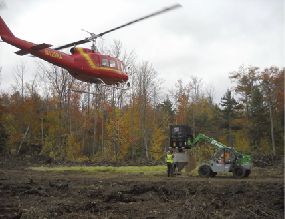 Pelletized limestone applied by helicopter to a subwatershed of Honnedaga L. 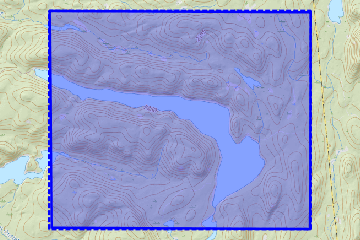