Daily mean values of gage height were determined, and continuous (30-minute interval) data consisting of specific conductance and water temperature were collected, at four sites; each site showed typical seasonal fluctuations and the effects of precipitation.

Streamflow affected discrete water-quality. Dissolved oxygen always increased with increased streamflow. Most cations (including barium and strontium), along with pH, specific conductance, and total dissolved solids, decreased with greater streamflow, reflecting the dilution effect of moderately acidic surface runoff and precipitation on groundwater discharge (base flow) into the stream channels. Concentrations of trace elements varied by constituent and streamflow.

On the basis of the results of water-quality analyses for the selected constituents, the water quality in 9 of the 12 streams can be considered fair or attaining with no measured constituent exceeding a U.S. Environmental Protection Agency maximum or secondary contaminant level. Abandoned mine drainage (AMD) affects Glenwhite Run, Blair Gap Run, and Sugar Run. For Sugar Run, the AMD is reflected in the elevated iron concentration (greater than 300 micrograms per liter). Manganese concentrations greater than 50 micrograms per liter were measured in Glenwhite Run, Sugar Run, and Blair Gap Run.

A mixing curve based upon chloride/bromide ratios for two end points—precipitation and deicing salts—indicate that deicing salt is migrating to the streams. A similar curve representative of late-emerging flowback water from Marcellus gas wells indicated that the surface-water samples had not been influenced by such brines.

On the basis of the concentration of major ions, the streams in the study area generally had mixed cation and anion compositions. Calcium is the dominant cation in one stream. Carbonate and bicarbonate are the dominant anions for two streams, and sulfate is dominant in three streams. The remaining six streams do not have a dominant ion.

Biotic health was characterized at 10 of 12 stream sites; the two sites excluded were established late in the study period (May 2013) for refinement of water quality in the headwaters of Poplar Run and the location of Marcellus Formation gas wells. On the basis of the Maryland Index of Biotic Integrity (MdIBI) for fish assemblages, 8 of 10 streams can be considered in fair health. Tipton Run had the highest MdIBI score (3.75) and the greatest number of native species. South Poplar Run had the lowest MdIBI score (1.75); pollution tolerant blacknose dace was dominant. On the basis of the Pennsylvania Department of Environmental Protection macroinvertebrate index of biotic integrity, 9 of 10 streams were characterized as attaining, with scores as high as 88.9 at Tipton Run. Only Sugar Run was characterized as impaired, with a score of 40.4. 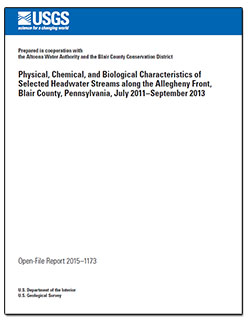