This data release consists of a time series of digitized glacier margins for the 37 named glaciers of Glacier National Park (GNP) and two glaciers on U.S. Forest Service’s Flathead National Forest land. The polygons represent the main body portion of each glacier as analyzed from aerial imagery from the years 1966, 1998, 2005 and 2015. Disconnected patches are not included as this dataset represents only the main body features of the named glaciers in GNP and environs. File attributes list specific source imagery.

This data release consists of a time series of digitized glacier margins for the 37 named glaciers of Glacier National Park (GNP) and two glaciers on U.S. Forest Service’s Flathead National Forest land. The polygons represent the main body portion of each glacier as analyzed from aerial imagery from the years 1966, 1998, 2005 and 2015. Disconnected patches are not included as this dataset represents only the main body features of the named glaciers in GNP and environs. File attributes list specific source imagery.

This dataset was created to develop a time series and history of glacier recession in Glacier National Park (GNP), Montana, USA. The dataset delineates the 1966, 1998, 2005 and 2015 perimeters of the 37 named glaciers of Glacier National Park and two additional glaciers on U.S. Forest Service’s Flathead National Forest land (the Bob Marshall Wilderness Complex) which borders GNP to the south. Establishing rates of glacier retreat, using the decreasing area of glacier ice, is key to understanding the Glacier National Park ecosystem and future state of resources. For instance, glacial meltwater supplies critical meltwater habitat for endangered stream insects. More broadly, retreating glaciers are indicative of long term climate change and have hydrologic and ecologic importance to many park resources. Glaciers and their retreat are of great interest to park visitors and the American public and are part of Glacier National Park's appeal. This is important because Glacier National Park is a major driver of the regional economy. Appropriate use of these data include comparing the area of Glacier National Park's glaciers among the years included in this data release, and from different parts of the world. The change in glacier area can be used to test models of glacier-climate interactions, and to estimate glacier contributions to streamflow. The "named glaciers" constitute a subset of the total perennial snow and ice inventory of GNP and do not represent a comprehensive accounting of all glaciers or permanent ice features in the park. A subsequent dataset will be published that will include all cryospheric features and better represent the hydrologic contribution of ice and snow features of the park. The criteria for determining which bodies of ice constituted a glacier in this analysis are detailed in the “supplemental info” section of each xml file. Appropriate use of these glacier area data come with caveats. The first is that the glacier margins, and calculated area, reflect only the footprint of the glaciers. There are no ice depths for the majority of the glaciers so ice volume cannot be directly calculated. Thus, in theory, a small glacier that is thick could have the same volume as a larger glacier that is thinner. Although in general, larger footprint glaciers will have more volume, the relationship between area and volume is variable enough such that reduction, or lack thereof, in area for each glacier through time must be interpreted with caution. One example will serve to illustrate this latter point. Several of the smaller glaciers in Glacier National Park formed on benches or ledges on steep slopes. The footprint of these glaciers was limited by the space afforded by the benches. Thus, in the past, the glaciers could not grow any larger in area because accumulated snow and ice would fall over the edges. However, these glaciers gained in volume by growing to the maximum thickness that could pile up on the bench. Once warming temperatures initiated accelerated ice melt, these small glaciers first lost thickness and volume without their footprint changing significantly. As these small glaciers became thinner, the continued ice melt caused them to retreat from the edge of the bench. Therefore, the relatively minimal reduction in areas for these small glaciers between a period like 1998 and 2005 does not necessarily indicate that there was little loss of ice. Another caveat is that, for some glaciers, continued warming temperatures begin to have less influence on glacier size once the (now smaller) glaciers retreat to the upper confines of a cirque basin. These glaciers are now positioned under steep slopes and headwalls where there is more shade to slow melting, greater occurrence of snow avalanches which add mass to the glacier, and wind deposition of snow from other areas. Although these factors were contributing to ice accumulation in the upper portions of the glacier when the glacier was much bigger, they were minor factors in overall ice formation and melting. Now these factors are impacting a much larger percent of the glacier area even as the overall glacier area shrinks. The net result is that ice retreat and glacier area contraction can slow down, because of these compensating factors, even as regional air temperatures continue to increase. This complicates the simplistic assumption that more warming equals faster ice melt. The last caveat is that, because of the complicating circumstances described above for small glaciers, the best measure of glacier response to warming temperatures is to look at the entire population of glaciers in Glacier National Park. 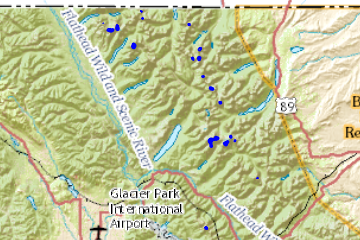