The Nonindigenous Aquatic Species (NAS) Database and Alert System (https://nas.er.usgs.gov/default.aspx) provides a framework for the rapid dissemination of new invasions as they are incorporated into the NAS Database. The system notifies registered users of new sightings of >1,330 non-native aquatic species as part of national-scale early detection and rapid response systems (EDRR), and in support of several federal programs: National Invasive Species Council, Aquatic Nuisance Species Task Force, and other Department of the Interior agencies. The NAS group has developed a new tool, the Alert Risk Mapper (ARM; https://nas.er.usgs.gov/AlertSystem/default.aspx), to characterize river reaches, lakes, and other waterbodies at potential [...]

The Nonindigenous Aquatic Species (NAS) Database and Alert System (https://nas.er.usgs.gov/default.aspx) provides a framework for the rapid dissemination of new invasions as they are incorporated into the NAS Database. The system notifies registered users of new sightings of >1,330 non-native aquatic species as part of national-scale early detection and rapid response systems (EDRR), and in support of several federal programs: National Invasive Species Council, Aquatic Nuisance Species Task Force, and other Department of the Interior agencies. The NAS group has developed a new tool, the Alert Risk Mapper (ARM; https://nas.er.usgs.gov/AlertSystem/default.aspx), to characterize river reaches, lakes, and other waterbodies at potential risk of invasion from a new nonindigenous species sighting from NAS Alerts for the contiguous U.S. (U.S.) and Hawaii. The ARM tool is used to assess the short-term risk, within six months, of a nonindigenous species possible invasion of new waterbodies. The risk assessment is species-specific and utilizes a nonindigenous species current range and development of credible scenarios of its potential movement within a drainage. The at-risk waterbodies are selected to account for the species mobility and directionality of movement (downstream, upstream, or over-land) along with drainage barriers (dams and waterfalls). Each ARM map includes two views, the local view of the highlighted at-risk waterbodies and alert sighting location, and a regional view highlighting the alert sighting location and previous NAS occurrences of the species. The map also includes a data table informing about the NAS Alert sighting. ARM maps accompany the NAS Alert emails sent out to subscribers and managers and are accessible through the NAS Database.

The project team achieved the primary objective of the project, to expand the tool’s geographical extent to the entire U.S. and Hawaii. The original pilot version of the ARM tool was created for generating risk maps for waterbodies or river reaches within the eight states of the Southeast U.S. region (AL, FL, GA, LA, MS, NC, SC, TX). With the expanded geographical extent, nearly all current and future NAS Alerts, with exceptions for alerts on private property, failed populations, non-specific locations, or marine introductions, now include ARM maps. The geographical expansion of ARM has improved the NAS program’s alerts effectiveness as a tool for EDRR by explicitly delineating reaches and waterbodies where a species may spread from an introduction site. The newly expanded ARM tool makes use of the National Hydrography Dataset Plus (NHDPlusV2; McKay et al. 2012) stream network system for our spatial framework, thus providing a better stream and waterbody representation on the ARM maps. Created ARM maps are stored and accessible on the NAS Database website.

The expanded geographical extent of the ARM tool required an expanded set of barriers to capture the unique regional drainage characteristics. The project team in collaboration with researchers from the Core Science Analytics and Synthesis & Libraries group have developed a national waterfalls data layer for the U.S. and Hawaii. This new dataset contains >13,500 waterfall locations from the World Waterfall Database (https://www.worldwaterfalldatabase.com) and linked to the NHDPlusV2 and NHDPlus High-Resolution stream layers. This new dataset will be used in concert with the large dam locations from the National Anthropogenic Barrier Dataset (NABD; Ostroff et al. 2013) to represent drainage barriers for ARM maps. Inclusion of the Hawaii waterfalls is in development; once completed the project team will disseminate these new national waterfalls products to ScienceBase.

The expanded geographical extent to the entire U.S. and Hawaii has increased the need and frequency for creating ARM maps. The project team is developing an automation process to speed the creation of the ARM maps in ArcGIS Pro (https://pro.arcgis.com/en/pro-app/). The automation of the ARM maps includes several discrete elements to accomplish the desired map making capacity. We have accomplished creating several essential elements concerning the automation process by gathering specimen information from the NAS database and including relevant fields on the ARM map publication. These tasks were accomplished via SQL queries to tables in the NAS database and added as query layers in ArcMap and as a query table in Microsoft Excel. With the SQL queries, we were able to generate the unique specimen ID, the scientific and common name, the level of the alert (Country, State, County, and/or drainage), the date the alert was created, the date and location, including coordinates, of the occurrence, and any comments attributed to a bonus alert. These query results populated the table on the NAS ARM map and provided georeferenced points for the specimen in the alert and previous occurrences of the same species.

The project team has also developed a new internal ARM species table to inform the ARM automation map process on how to select the at-risk waterbodies based on the species-specific distribution potential. The table includes information on species life history that will help determine the directionality and distance of movement (downstream, upstream, or over-land) of a species within a drainage if unobstructed. Passive movers (plants and Dreissena spp.) will be a risk only to downstream waterbodies, while active movers (e.g., fishes and crayfishes) have the potential to move in all directions. The table uses reach specific information from the NHDPlusV2 stream layer on (stream order and annual average water velocity) in concert with information on species mobility and average seasonal movement. The combination of this information will inform which waterbodies are at-risk from the NAS alert sighting, highlighted on the ARM map.

We are committed to utilizing the most up-to-date programs for this automation step of the ARM tool. In an attempt to do so, we are working in ArcGIS Pro (Pro). The pilot version of ARM was developed for use in ArcMap, with manual creation of many of the map elements individual for each map. The move to automate the map making process and use of Pro has provided several challenges. There are several differences between ArcMap and Pro related to functionality or tool availability. Pro is a new and fast evolving product, and a full set of stable tools might not be available for a while. The project team has found a few examples of challenges of working in Pro compared to ArcMap. Query layers that can be created and modified in ArcMap (edit the SQL query) do not work in Pro. We found that Python scripts don’t work the same way within Pro (Python prompt) and in stand-alone mode. For example, a script creating and adding query layers to a project works within Pro, but not in stand-alone mode. Some of the map visual elements that could be created in ArcMap, e.g., the editing of queries in Excel tables on map layouts, is unavailable in Pro. This required visual element may be accomplished with a program outside of Pro. The project team is still working to overcome these limitations and will share their resolutions as they become available.

The project team has also found that representation of many waterbodies (e.g., small ponds and canals) that might be at-risk from a species introduction are missing in the NHDPlusV2 system. This will cause a problem for the automation process as any unrepresented waterbodies that are encountered while creating ARM maps will need to be manually created. The project team plans to build a geodatabase to accumulate these manually created waterbodies to share publicly in the future and potentially help enhance future versions the NHD. 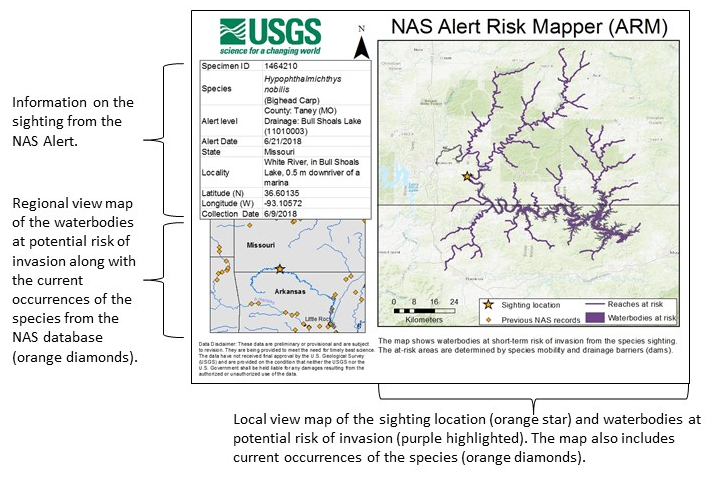 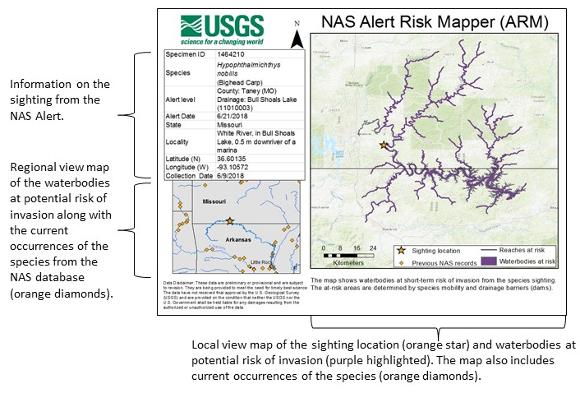