Kīlauea Volcano on the Island of Hawai‘i was in a state of nearly continuous eruption from 1983 – 2018. Large amounts of sulfur dioxide gas (SO2) were released from the volcano’s East Rift Zone (ERZ) during the entire eruptive period, and from the Overlook vent at the summit of the volcano from 2008-2018. This data release presents ground-based estimates of SO2 emission rates from the two gas emission sources for the period 2008-2013. For the two-year period 2008-2010, the summit data have been revised from previously published emission rates (Elias and Sutton, 2012). During this era, very high emissions from the volcano’s newly active lava lake led to opaque plumes and challenges in accurately quantifying SO2 column densities and [...]

Kīlauea Volcano on the Island of Hawai‘i was in a state of nearly continuous eruption from 1983 – 2018. Large amounts of sulfur dioxide gas (SO2) were released from the volcano’s East Rift Zone (ERZ) during the entire eruptive period, and from the Overlook vent at the summit of the volcano from 2008-2018. This data release presents ground-based estimates of SO2 emission rates from the two gas emission sources for the period 2008-2013. For the two-year period 2008-2010, the summit data have been revised from previously published emission rates (Elias and Sutton, 2012). During this era, very high emissions from the volcano’s newly active lava lake led to opaque plumes and challenges in accurately quantifying SO2 column densities and emission rates (Kern and others, 2012, Elias and others, 2018). Our revised estimates take advantage of more modern and robust analysis techniques and represent more accurate values than originally published. SO2 emission rates for the period 1979-2018 are available in a variety of publications listed at the end of this abstract.

Our best retrieved estimates for summit emission rates during the 2008-2013 period were calculated using the SRT-DOAS (Simulated Radiative Transfer-Differential Optical Absorption Spectroscopy) analysis technique applied to road-based traverse data (Kern and others, 2012). These data were measured using a FLYSPEC system traversing Crater Rim Drive as described in Elias and Sutton (2012) where most of the plume was within 1 km of the Halemaʻumaʻu lava lake, and high column densities of SO2 were present. The SRT-DOAS traverse data are sparse due to limited availability of spectral data encompassing the extended wavelength range needed for a robust retrieval, so we present additional emission rates calculated using dual-fit windows (DFW) with an analysis range of 305-315 nm and 319.5 – 330 nm (Elias and others, 2018). These data are presented in the CSV files “SummitSO2_SRT_RdTraverse_2008-2013” and “SummitSO2_DFW_RdTraverse_2008-2013”. With few exceptions, the DFW values are lower than the SRT-DOAS data, particularly during the 2008 periods of maximum emissions. See Elias and others (2018) for specific details on these methodologies as applied to Kīlauea Volcano. Note that the SRT-DOAS approach relies on wavelength-dependent radiative transfer effects that occur when SO2 absorption becomes so strong that light penetrating the plume core cannot reach the spectrometer on the ground. Therefore, the technique is more robust during periods of extreme SO2 degassing (e.g. in 2008) than later in the eruptive sequence when plumes became more dilute. Though all our measurements are presented here for completeness, ongoing research is focused on developing more sophisticated filters to assess data quality. For example, webcam imagery might be able to help identify measurement conditions which are inconsistent with the geometric assumptions made in the SRT-DOAS analysis (see Kern and others, 2012), or days on which complex wind fields may have led to swirling or stacked plumes. Despite our best efforts at rigorous data analysis using SRT-DOAS and/or DFW analysis, measuring SO2 emission rates greater than 10,000 metric tonnes per day (t/d) by proximal FLYSPEC traverses is associated with considerable uncertainty (Kern and others, 2012, 2020, Elias and others, 2018). A comparison with monthly average GOME2 emission rate estimates (Beirle and others, 2014) shows our SRT-DOAS proximal road-based retrievals during the peak emission interval, May-Sept 2009, to be below space-based values by ~65-120%. Following peak emissions in 2008, a comparison of GOME2 and SRT-DOAS monthly averages shows a non-systematic difference ranging from 4% to 110% with a mean difference of ~40% for the period 2009-2012 (Fig. 1).

In addition to the summit road-based measurements, high time resolution (10-second) emission rates are reported for June 2012 – December 2013, using an array of fixed, upward looking UV spectrometers located approximately 3 km downwind of the Halemaʻumaʻu gas emission source (Elias and others, 2018). Each station calculates the overhead SO2 column density between 0830 and 1700 Hawaii Standard Time when there is sufficient UV energy to obtain a reasonable signal-to noise-ratio year-round in Hawai‘i. A ground-based ultrasonic anemometer located 600 m northeast of the array midpoint (SDH) was used to measure 3m above ground level wind speed as a proxy for plume speed which is required to derive emission rates. As reported by Elias and others (2018), a measured discrepancy of 22% exists between coincident array measured plume speed (not available for 2012-2013) and wind speed derived from the SDH anemometer. Since plume speed is a direct multiplier in calculating emission rate, the array emissions reported here have been adjusted by +22% over their uncorrected values (see Elias and others, 2018 for further details). The position of the plume maximum along the array was used to indicate the plume azimuth, which was then used to correct the emission rate to account for conditions when the plume was not perpendicular to the array of spectrometers. These data are presented in the CSV files “SummitSO2_FLYSPECarray_10s_2012-2013” and “SummitSO2_FLYSPECarray_DailyAverage_2012-2013”. Two simple data filters have been applied to remove questionable values caused by instrumental errors or non-ideal environmental conditions. 1) We present emission rates collected at wind speeds between 2.5 and 20 m/s, as we are confident that these conditions provide a reasonably compact plume that exhibits minimal effects from atmospheric wind shear. 2) We consider emission rates below 300 t/d to be below the detection limit of the FLYSPEC array. This is based on the minimum column density that we are confident indicates the presence of the plume (350 ppmm) and minimum wind conditions that produce a measurable plume (2.5 m/s). The array UV spectra were analyzed using a 305-315 nm wavelength window and represent a minimum constraint on emission rate. Although moving farther downwind allows for measurements of optically thinner plumes which simplifies the spectroscopy, the summit plume was still sufficiently dense to cause errors due to radiative transfer effects (Kern and others, 2012, Kern and others, 2020). A more comprehensive algorithm using a dual fit window was instituted for the FLYSPEC array data analysis beginning in 2014 resulting in more accurate retrievals (Elias and others, 2018). Due to the 2012-2013 data collection method, we are unable to reanalyze these data using the more robust method. These data provide high time-resolved emission rates that are useful for examining short-term degassing processes, although there is uncertainty in the absolute magnitude of these values. Evidence from space-based SO2 emission rate annual averages (OMI) for 2013-2014 and FLYSPEC array dual fit-window analyzed emissions for 2014 suggests systematic underestimation in the range of 50-65% by the array in 2012-2013. Array 2012-2013 monthly averages compared to road traverse SRT-DOAS and DFW analyzed emission rates suggest a non-systematic difference ranging from -92 to +118% with a mean difference of ~38% (Fig. 1).

In addition to the summit data, traditional campaign road-based traverse SO2 emission rate measurements are reported for the ERZ eruption (Elias and Sutton, 2012, Horton and others, 2006, Elias and others, 2018). These data were measured along the Chain of Craters Road using a FLYSPEC spectrometer system, within the Hawaiʻi Volcanoes National Park, and follow the protocol previously documented in USGS Open-File Report 2012-1107. The data are irregularly spaced (days to weeks), as successful measurements were dependent on appropriate wind and weather conditions and staff availability. The ERZ campaign-style emission rate values are provided along with the wind speed and direction data used to calculate the emission rates, and a quality code to help identify conditions that may affect the data quality. The column densities used to calculate emission rates were generated using a traditional fit window of 305-315 nm wavelength as documented in Horton and others (2006) and Elias and others (2018). Since the measurement traverse was located ~15 km downwind of the source vent where plume dilution was significant, plume column densities were quantified without the radiative-transfer-induced errors associated with the summit measurements. These data are presented in the CSV file “ERZSO2_RdTraverse_2008-2013”.

The radiance spectra for the campaign ERZ and summit emission rate analyses are included in this data release. SumRdTraverseSpectra_2012-2013.zip contains dated folders with the individual spectra collected during the summit plume traverses. ERZRdTraverseSpectra_2008-2013.zip contains annual folders with date-named files collected during the ERZ plume traverses. For both datasets, the incident spectral radiance was measured between 260 and 410 nm at a spectral resolution of 0.5 nm. Spectral intensity is reported in digital counts, where each count is linearly related to radiance (> 99% linearity). The FLYSPEC spectra are saved in a binary file format (scan*.bin files). A new scan*.bin file is saved each time a new set of measurements (typically containing multiple traverses) is begun. Each binary file contains an array of spectra. Each spectrum is composed of an array of 2048 pixel intensities stored in single precision floating point format (4 bytes). Individual spectra can be addressed within a binary file by accessing the file position N × 8192, where N represents the desired spectrum number. Each binary file is accompanied by a scan*.txt file saved in ASCII format. The *.txt file contains metadata for each spectrum stored in the associated scan*.bin file. Each row of text represents an individual spectrum. The text columns ascribe each spectrum with an identifying number, year, month, day, hour, minute, second, GPS time, latitude (in degrees and decimal minutes), longitude (in degrees and decimal minutes), altitude (in meters), and preliminary SO2 column density in ppmm (column 16). The preliminary SO2 column densities are obtained by comparing incident radiance spectra with spectra obtained with SO2 gas calibration cells inserted into the light path (see Horton and others, 2006 for details). These preliminary values may not be accurate for the summit due to complex light path distributions occurring in and around the dense gas and aerosol clouds present near Kīlauea’s Overlook vent. See Elias and others (2018) and Kern and others (2012) for further details.

These time series data were obtained in order to quantify the amount of SO2 released from the Kīlauea ERZ and summit eruptions. The SO2 data are used to track the status of the eruptive activity, for input to climate change and plume dispersion models, and as a reference point for volcanic gas hazards impact. 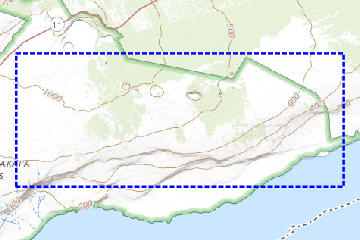