This indicator is an index of impacts from hardened structures like jetties, groins, and human infrastructure.Reason for SelectionAltered beaches (including human developments along shorelines, jetties, groins, seawalls, revetments, and other structures) provide a measure of overall habitat alteration. Human infrastructure along shorelines generally stabilizes barrier islands, and thereby impedes beach migration and barrier island rollover processes. Additionally, seawalls are difficult to locate on aerial photography, and developed shorelines may act as a surrogate for unmapped shoreline armoring.Groins, seawalls, jetties, and revetments have resulted in narrowing of beaches, or greater beach loss, compared to unstructured beaches [...]

This indicator is an index of impacts from hardened structures like jetties, groins, and human infrastructure.

Groins, seawalls, jetties, and revetments have resulted in narrowing of beaches, or greater beach loss, compared to unstructured beaches (Dugan et al. 2008, Hall and Pilkey 1991, Mohanty et al. 2012, Pilkey and Wright III 1988). Jetties alter sand transport and may result in downdrift erosion, although effects are dependent on the context of the structure (Bruun 1995). Bruun (1995) showed examples ranging from 5-13 km.

– Spatial designations of the Coastal Barrier Resources System, as a result of the Coastal Barrier Resources Act (1982) and its update (1990), were used to set boundaries of undeveloped beaches U.S. Fish and Wildlife Service 2016-03-14, accessed December 6, 2016). The Act designated relatively undeveloped barrier island segments as ineligible for Federal expenditures, such as Federal flood insurance.

1) Beaches outside of the Coastal Barrier Resources System were considered vulnerable to alteration.

2) We buffered perpendicular structures by 5 km and considered shoreline within this radius altered.

3) All beaches outward from parallel structures were considered altered.

4) We resampled the 200 meter Blueprint 2.1 ecosystem map to 30 meters and clipped the results from step 3 to the beach and dune class.

The final indicator has values ranging from:

2 = High (less vulnerable without nearby jetties/groins)

1 = Medium (less vulnerable with nearby jetties/groins)

– The effect of perpendicular structures (e.g., groins, jetties) on beaches is not straightforward. We used a 5 km radius around these structures to consider beaches altered, but the effect on beaches may be directional and may be lesser or much greater than the 5 km radius we selected.

– Data were digitized from known sources, but should be considered a minimum amount of hard structures in the region. Further mapping and checking for known structures is warranted.

– We have considered all beaches outside of the Coastal Barrier Resources System to be altered by human development, which may not necessarily be true.

– Changes to the designations continue annually, including further additions to the system. The Coastal Barrier Resources System dataset used in this indicator is from 2016.

– Beach renourishment negatively affects some beach and dune species, and is not captured by this indicator.

Coastal Barrier Resources System (CBRS) digital boundaries in this mapper are only representations of the official CBRS boundaries and are not to be considered authoritative. In general, these digital boundaries can be considered accurate to within approximately 150 ft of the actual CBRS boundaries as shown on the official maps. Additionally, because CBRS units extend seaward out to either the 20- or 30-ft bathymetric contour (depending on the location of the unit), the true seaward extent of the units is not shown in this mapper. The Service is not responsible for any misuse or misinterpretation of this digital data set, including use of the data to determine eligibility for Federal financial assistance such as Federal flood insurance. Click here for information on obtaining an official determination of whether or not an area or specific property is located within the CBRS. Visit this link for information on project consultations. For information on the horizontal accuracy of this digital data set, please read the metadata.

There are numerous problems with using South Atlantic indicators for change analysis. Please consult Blueprint staff if you would like to do this (email hilary_morris@fws.gov).

Rice, T.M., 2012a. Inventory of Habitat Modifications to Tidal Inlets in the Continental U.S. Coastal Migration and Wintering Range of the Piping Plover (Charadrius melodus). Appendix 1b, in Comprehensive Conservation Strategy for the Piping Plover (Charadrius melodus) in its Coastal Migration and Wintering Range in the Continental United States. U.S. Fish and Wildlife Service, East Lansing, Michigan.

otherRestrictions - limitation not listed; This work is licensed under a [Creative Commons Attribution 4.0 International License](http://creativecommons.org/licenses/by/4.0/). The blueprint data and maps provided are only intended for use as a reference tool for landscape-level conservation planning efforts. 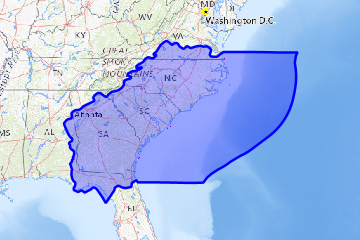