These data were edited in January 2017: attribute labels for species name have been converted to species code.

Marine birds comprise an important community of meso- and upper-trophic-level predators within the northern California Current System (NCCS). The NCCS is located within one of the world’s four major eastern boundary currents and is characterized by an abundant and diverse marine ecosystem fuelled seasonally by wind-driven upwelling which supplies nutrient-rich water to abundant phytoplankton inhabiting the surface euphotic zone. The oceanographic conditions throughout the NCCS fluctuate according to well-described seasonal, inter-annual, and decadal cycles. Such oceanographic variability can influence patterns in the distribution, abundance, and habitat use among marine birds and mammals. Although there are an increasing number of studies documenting distributions and abundances among birds in various portions of the NCCS, there have been no comprehensive, large-scale, multi-seasonal surveys completed throughout this region since the early 1980s (off northern California; Briggs et al. 1987) and early 1990s (off Oregon and Washington; Bonnell et al. 1992, Briggs et al. 1992, Green et al. 1992). During 2011 and 2012, the U.S. Geological Survey (USGS), Western Ecological Research Center completed the Pacific Continental Shelf Environmental Assessment (PaCSEA) which included replicated surveys over the continental shelf and slope from shore to the 2000-meter (m) isobath along 32 broad-scale transects from Fort Bragg, California (39° N) through Grays Harbor, Washington (47° N). Additionally, surveys at a finer scale were conducted over the continental shelf within six designated Focal Areas: Fort Bragg, CA; Eureka, CA; Siltcoos Bank, OR; Newport, OR; Nehalem Bank, OR; and Grays Harbor, WA. We completed a total of 26,752 km of standardized, low-elevation aerial survey effort across three bathymetric domains: inner-shelf waters (90% of the total number of birds counted (19,033) with Common Murres (Uria aalge) representing the majority of individuals counted (70.4% of total). The remaining six most abundant taxa included: Surf/White-winged Scoters (Melanitta perspicillata/M. fusca; 4.8% of total), Herring/Thayer’s Gulls (Larus argentatus/L. thayeri; 3.8% of total), Cassin’s Auklets (Ptychoramphus aleuticus; 3.8% of total), Glaucous-winged Gulls (Larus glaucescens; 3.7% of total), Black-legged Kittiwakes (Rissa tridactyla; 2.0% of total), and Western Gulls (Larus occidentalis; 1.9% of total). During summer, five species comprised >95% of the total number of birds counted (17,063) with the majority comprised of Sooty Shearwaters (Puffinus griseus; 54.1% of total) and Common Murres (34.4% of total). The remaining most abundant three taxa included: Fork-tailed Storm-Petrels (Oceanodroma furcata; 3.3% of total), Western Gulls (2.1% of total), and Leach’s Storm-Petrels (Oceanodroma leucorhoa; 1.1% of total). During fall, nine species comprised >85% of the total number of birds counted (23,376) with the majority comprised of Common Murres (50.0% of total) and Sooty Shearwaters (10.5% of total). The remaining seven taxa included Cassin’s Auklets (5.2% of total), Surf/White-winged Scoters (5.1% of total), Fork-tailed Storm-Petrels (3.8% of total), Red/Red-necked Phalaropes (Phalaropus fulicarius/P. lobatus; 3.2% of total), California Gulls (Larus californicus; 3.1% of total), Northern Fulmars (Fulmarus glacialis; 2.7% of total), and Sabine’s Gulls (Xema sabini; 2.2% of total).

The authors of these data require that data users contact them regarding intended use and to assist with understanding limitations and interpretation. Unless otherwise stated, all data, metadata and related materials are considered to satisfy the quality standards relative to the purpose for which the data were collected. Although these data and associated metadata have been reviewed for accuracy and completeness and approved for release by the U.S. Geological Survey (USGS), no warranty expressed or implied is made regarding the display or utility of the data on any other system or for general or scientific purposes, nor shall the act of distribution constitute any such warranty. Any use of trade, firm, or product names is for descriptive purposes only and does not imply endorsement by the U.S. Government. 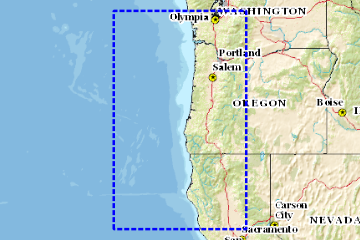