This data release is a compilation of six earlier reports on natural occurrences of asbestos in the conterminous United States, which were published separately; these are Van Gosen (2005, 2006, 2007, 2008, 2010) and Van Gosen and Clinkenbeard (2011). The earlier reports were compilations divided by regions of the United States; in each report the data were provided in spreadsheet format. This data release combines the regional datasets into a single compilation for the entire conterminous United States, and includes shapefiles and spreadsheet formats.

This data release provides site-by-site information on 876 natural occurrences of asbestos reported within the conterminous United States. This dataset allows the user to examine the distribution and geologic characteristics of the asbestos occurrences, which were identified by an extensive search of the geologic literature. Data on location, mineralogy, geology, and relevant literature for each asbestos site are provided in the digital files. The reported occurrences include 142 former asbestos mines, 222 former asbestos exploration prospects, and 512 other sites (occurrences) with described asbestos mineralization. A reported natural occurrence of asbestos was found in 34 of the 48 States of the conterminous United States.

This dataset was compiled through a systematic search of the published geologic literature. The search did not include unpublished documents, such as consulting or company reports. Although this asbestos dataset represents an extensive study of published literature, it should not be construed as the complete list. An asbestos site was included only when the literature specifically mentioned asbestos and (or) described the commonly recognized asbestos minerals as occurring in the asbestiform crystal habit. No attempt was made to infer the presence of asbestos if asbestos was not explicitly described. Only a small percentage of the sites were visited or sampled during this study.

For descriptions of the occurrences, the user should refer to references cited for each site record. Asbestos occurrences were described from outcrop exposures or in rock exposed by exploration and mining operations. Note that these site descriptions related to the time of each report's publication. Sites may have been subsequently modified by human activities since their description. For example, site remediation may have occurred since the source literature description.

All reports of asbestos mineralization found in the geologic literature (with adequate location information) were included in this study, regardless of the apparent size of the occurrence. The references cited for each asbestos site entry provide the most complete descriptions of these occurrences that was found in the literature. The descriptions range in detail from large, detailed geologic reports to a single sentence. While every attempt was made to compile a comprehensive dataset, this compilation cannot represent a complete list of the natural occurrences that exist, but rather, only those found in a systematic search of the available published geologic literature. It is possible that some published sources were missed, and it is likely that unpublished sources exist that could supplement this inventory, or that occurrences exist that have not been documented in either the published or unpublished literature.

This data release intends to provide Federal, State, and local government agencies and other stakeholders with information on the geology and distribution of known natural occurrences of asbestos in the conterminous United States. To enable the user to display, manipulate, and (or) compile a database of the occurrences, the data is provided in three types of formats: Esri shapefile, and Excel and comma-separated values (CSV) files. 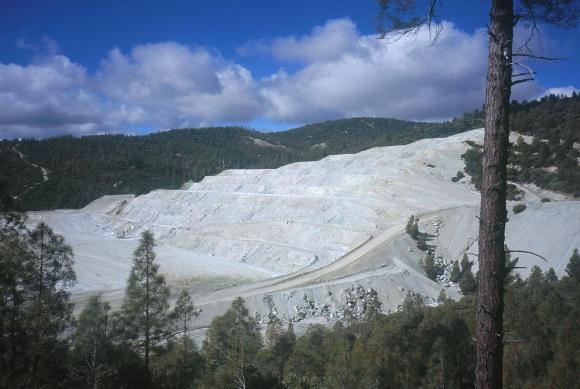 KCAC chrysotile mine, CA, in 1998; the last asbestos mine in the US.